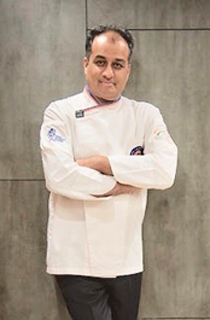 Chef Sunil Soni joined the Satkeer Catering board in 2017 as an Culinary Advisor, reviewing our menus, processes and procedures. His advice made us think out of the box in many directions which helped our team of Chefs to become fluid and to adapt to current trends.

Sharing the same vision as our CEO, in 2018 Chef Sunil Soni was persuaded to become Satkeer Catering’s Executive Head Chef and International Brand Ambassador. His influence and forward thinking attitude has helped us to remain at the forefront of the Catering industry and his efforts have contributed to our success.

Chef Sunil Soni was born and brought up in New Delhi, and did his initial culinary training at Taj Hotel and is a graduate of IHM.

Always keen on travelling and exploring different cuisines he went to Singapore early in his career and learned oriental cuisine. Later on his experience in Kuwait brought him closer to middle-Eastern cuisine. He setup Bukhara restaurant in Kuwait which became a popular place for both locals as well Indians to eat. It was well received in press too. He spent time as an Oriental chef in Kenya in mid-nineties before going to Kuwait.

He soon started an Indian Restaurant in a resort in Seychelles which was an instant hit among the locals as well as visitors. He went to a special assignment to spruce up a Sheraton resort before going to USA. He was instrumental in starting a state of the art Indian Restaurant in Boston USA with a concept of open kitchen when that concept was not very well known. It was duelled with a live cooking station. This concept and Awadhi cuisine brought laurels to the restaurant. He opened another one in (Tamarind Bay) Cambridge MA USA with an Awadhi Cuisine concept which was the talk of the town. He would return to Kenya after USA to take over a coastal resort in Watamu, Kenya at the owner’s (friend) request.

Chef Soni has always been intrigued by the royal cuisine of Awadh and revived it in USA. He explored the area’s rich history, culture and tradition. While in USA his biryani techniques were featured in a short film produced in collaboration with Boston University, MA. He was featured in a famous TV show ‘Phantom Gourmet’ in Boston USA. His restaurants were consistently Zagat rated for consequent years and featured in as ‘Best of Boston’ frequently.

He returned to India and joined Clark group of hotels as their Corporate Executive Chef. He is the Vice president of Fenn Trust and has been a judge in the highly acclaimed media show “Go cheese – Indian Chef Awards at the national level. His cuisine and recipes are popular enough to attract the media, wherever he has been. Following that he has been invited to Hotel Jaisingh Garh, Udaipur as a judge for the National Cookery Contest, 2018.

Chef Soni has been written about and critically acclaimed in numerous magazines and newspapers both in India and abroad including India, Kuwait, Kenya, Seychelles and USA. He is a prolific writer and comes up with relevant articles, ahead of times about food. Lately, after being in the industry (both India and overseas) for more than 30 years, he has been parting his expertise as a consultant to various culinary institutions and has been an advisor to Abdul-Aziz Fama, His Excellency, Prince Saudi Arabia. He has shown interest in vedic cooking which is a hot topic in the culinary world.

Chef Soni is a world renowned culinary advisor and has currently taken up a role of Vice President food and beverages in Goldstone Hotels and Resorts, India. He is also a Brand Culinary Director at HNI Le Panache, Director Hospitality Business at Federation of Indian Food & Hospitality Industry (FIFHI).

Labelled as Biryani Man of India Mr Soni was invited as a grand jury in “Kahin Ghum na ho jaye’ National cookery contest, Dec 7th, 2019. The program was covered by Aaj Tak and youtube. He consistently being invited to attend many of the food competitions throughout India, whether it is as a panellist, celebrity judge or an advisor and it is always a honour to attend.

He is also a Member of Board of Studies of School of Hospitality, Galgotias University, Greater Noida, India.